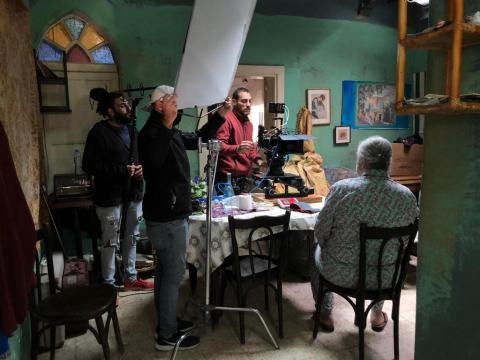 The shooting of Kaf Adas, the short feature film that won the Palestine Sunbird Production Award, ended in Beit Jala earlier this month.  The film was made possible thank to the support of the Palestinian Ministry of Culture and the Hakawati Theater.

Director Riyad Idais wrote the scenario and the events featured in the film take place in the old city of Jerusalem. Faris, 55 years is a frustrated, moderately talented writer who secretly marries Nada (second wife) without the knowledge of his first wife. On the first day of their marriage, a settler digging in his house searching for antiquities falls directly on them from the roof of their house! Taken by surprise Fares and Nada do not know how to behave in such circumstances. Should they report the incident to the police or keep quite?

The crew of the film was mainly Palestinian and composed by the Director of photography Ashraf Dawani, the Director of lighting Ibrahim Handal, the production manager Salim Abu Jabal, the interior designer Taqi al-Din Sabateen, clothes and makeup Mervat Hakroush, the assistant director Mai Jabareen, the sound man Essam Rishmawi, the camera assistant Yusef Hammad, and the production staff Ahmad Al-Jaaba and Wissam Jafari. With the participation of 2 trainees from Dar AlKalima University, Rana Abu Ishkheidem  for scenario follow up, and Saliba Rishmawi for voice recording.

Director Riyad Idais is in the editing phase of his film. We hope that Kaf Adas will take part in the 8th edition of Palestine Cinema Days 2021.