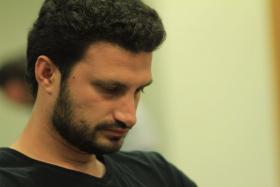 email:
Send Email
website:
www.saadaldin.net
Previous work :
Open Link
Open Link
Open Link
Pofession:
Camera Department
Cinematographer
مصور سنبمائي
Saad Aldin Alkharouf is an award-winning cinematographer based in the United Arab Emirates. Born and raised in Jerusalem, Saad discovered his passion for film-making in the rich history and culture of Palestine, where he was surrounded by the captivating stories of its people. The turning point in his life came with watching the critically-acclaimed 1976 film; The Message: directed by Moustapha Akkad. The film helped Saad realise his love for cinema and the need to turn it into his career. It is at The New York Film Academy in Abu Dhabi that he equipped himself to tell stories through medium of film. Saad was trained and worked with industry greats, like BAFTA Award nominee Brian J Breheny and Norman B Schwartz best known for his work on E.T. the Extra-Terrestrial and Total Recall. An avid follower of the discipline in lighting and framing a picture, Saad realised his real forte is in cinematography. He believes that a perfectly shot image can and should tell its own story. At Madrid International Film Festival 2016, Saad won the award for Best Cinematography in a Short Film, for his work on The Anklet. He works for a number of production houses, manning the camera for short films, TV series, reality shows, commercials, music videos, and corporate videos.