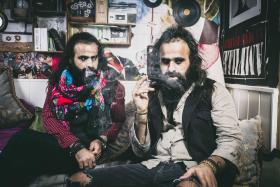 email:
Send Email
Previous work :
Open Link
Open Link
Open Link
Open Link
Open Link
Pofession:
Actor/Actress
Directing Department
Script Department
Twin brothers Tarzan and Arab Nasser were born in Gaza in Palestine in 1988. They study the Fine Arts at Al-Aqsa University and are passionate about painting and cinema. In 2010, they receive the Best Artist of the Year award foundation A.M. Qattan for their conceptual art work GAZAWOOD, a series of pseudo-Hollywood cinematographic posters, taking inspiration from the names Israeli military offensives against Gaza. After some experiences with documentary films and some shorts movies In 2013, they realize the short film CONDOM LEAD, which tells the intimacy disrupted by a couple during the war. The film is selected in official competition at the Cannes Film Festival. In 2014, they directed their first feature film DEGRADÉ, in a hairdressing for ladies in Gaza. The film was presented as a world premiere at the Critics Week of at the Cannes Film Festival 2015.