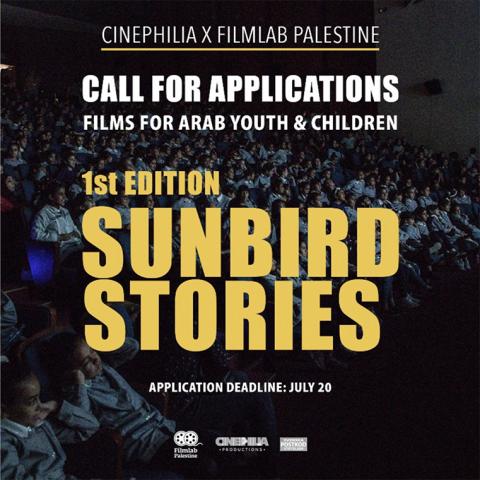 Launched by Filmlab Palestine and Cinephilia Productions, Sunbird Stories is a state-of-the-art development and production program that aims to instigate the growth of imaginative and thought-provoking films for young audiences across the Arab World.

With children and teens’ life being underrepresented on screen, the program is designed to stir up a genuine excitement in filmmakers to illustrate diversity by examining the significance of storytelling for young audiences and the power it holds in creating a positive change in the emotional and psychological fabric of the next generation of Arab youth.

During the 8-week intensive residency, selected filmmakers will work in three segments to develop their projects towards production: screenwriting, directing child actors, and producing.

Sunbird Stories will culminate in six to eight projects ready to advance into the production phase by equipping the teams with solid screenplays, directorial training, production packaging, financial and distribution plans.

A jury of industry professionals will award two projects, each $10,000 prize plus in-kind production and post-production services.

Two projects will be awarded the Sunbird Stories Production Prize of $10,000 (cash prize) each + in-kind services to facilitate production and post-production.

A table read for all the projects will be organized at the end of the program. Each filmmaker will cast their films to be read by actors (professional or non-professional). Filmmakers must direct the table read of their project. Each filmmaker will be given 20 minutes for the reading followed by 10 minutes of Q&A with the jury. The event will be open to the public (RSVP required).